The New York Times has a fun little “national health care systems” bracket tournament in its print edition today, so you can compare how successfully or not various countries on the planet monetize their citizens’ sickness and mortality. Or to put it another way, “which of these nations has the best health system?” (The winner, for some reason, is Switzerland.)

Not even a panel heavily weighted towards “health-care economists” could see the United States past the second round, where it lost narrowly, 3-2, to an eventual finalist, France. (The United States defeated Singapore in the opening stage.)

In the U.S.-France showdown, the advantage of France is described as “access”–by which is meant affordability and widespread availability of low-cost health insurance and medical care. The virtues of the United States are “innovation,” which is not defined at all, as is so often the case. So we have to try and read between the lines. It’s not too hard: a reader would need to discern that, for its advocates, “innovation” in the U.S. health care system means “medical technology.” Given the privatized nature of the U.S. health sector, it follows that what what we are really talking about here are “profitable medical technology corporations.” As if the function of a national health-care system is to facilitate the profitability of manufacturers of medical machinery. As if there were no other ways to incentivize such manufacture outside of an unequal, byztantine, and inconvenient privatized system.

I wonder if you replaced “innovation” with “profitable medical technology corporations,” though, if it would still get 2 votes even in this field.

TEAM, n.: A group of waged workers whose contractual obligation to their boss is dishonestly conflated with a moral duty to one another & themselves.

From a Florida Pizza Hut during Hurricane Irma. 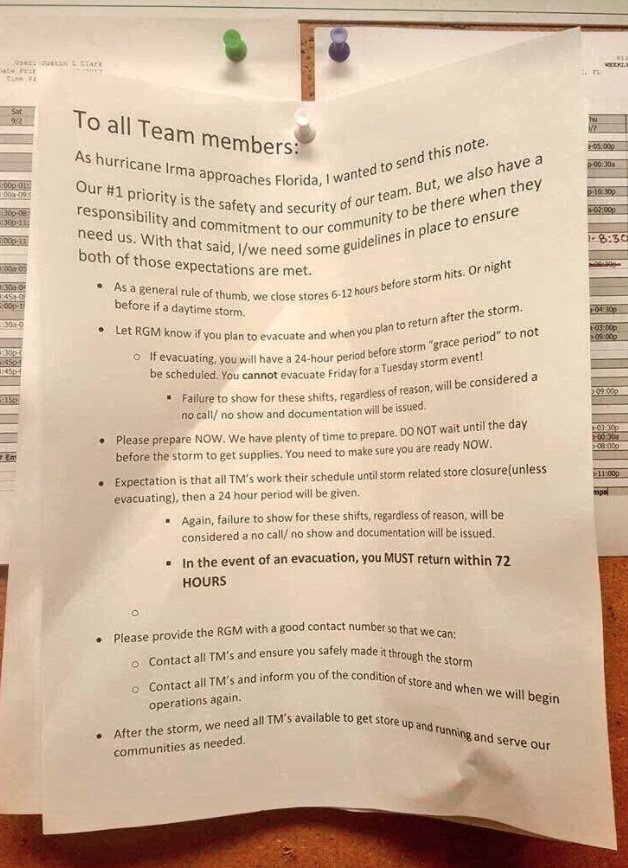