Hey gang! All the boys in #ISIS went to see the movie “Gone Girl” and we wish the “girl” who was “gone” was the Statue of Liberty!

Before the November ISIS massacre in Paris, I found an ISIS joke on reddit–a one-liner, which like much American ISIS humor was really a meta-joke about the inappropriateness of ISIS jokes. It began, “What’s the best part of an ISIS joke?”

The Paris attacks briefly elevated the inappropriateness of the genre, but this reticence didn’t last long. The right-wingers occupying the Malheur refuge in Oregon were renamed #VanillaISIS, and public discussions of ISIS became more ironic, as they have long been ever since the group became well known in the United States in 2014. Since then, ISIS has been the target of a level of ironic derision seemingly out of step with its brutal reputation. So: why is ISIS funny, and what is the best part of an ISIS joke, anyway?

One of the first classics of the genre was the Saturday Night Live skit about a suburban Dad dropping his daughter off at the airport for her very first trip to ISIS training camp. The real master, though, is Clickhole, in articles like like “Horrible: ISIS Fished Up All the Catfish Out of the Old Creek” and “ISIS Has Lost Sight Of What Our Founding Fathers Intended.” On Twitter, ISIS is the 21st-century update of your Dad’s “Cuba” or “Russia” in “love it or leave it” insults: “If u like the blue jays and live in America,” tweeted a patriotic Royals fan during the American League playoffs last October, “go join Isis.”

ISIS is funny in some of the same ways that Hitler has always been funny. In an interview, the philosopher Hannah Arendt quotes Bertholt Brecht at length on the necessity of Hitler jokes. “One may say that tragedy deals with the sufferings of mankind in a less serious way than comedy,” Brecht wrote. Arendt comments on his meaning: “What is really necessary is, if you want to keep your integrity under these circumstances, then you can do it only if you remember your old way of looking at such things and say: ‘No matter what he does and if he killed ten million people, he is still a clown.'” Ultra-reactionary bombast invites deflating, self-affirming mockery.

For some ISIS humor, this analysis seems on target: in a sketch by Palestinian comedy group Watan ala Watar, for example, ISIS soldiers are mocked as pompous cowards, hiding behind weapons, self-righteousness, and the greedy hoarding of “blessings.” In the skit, two guerrillas at a checkpoint argue over who gets to murder a Jordanian man but timidly wave through an Israeli chatting indifferently on his cell phone, protected by the armor of a nationality the guerrillas are not willing to challenge.

But this humor requires a familiarity with ISIS’ national and sectarian politics and a proximity to their effects. This has never been why Americans joke about ISIS. At the end of SNL’s mock ISIS recruitment video, the suburban Dad locks eyes with an ISIS gunman atop a Toyota pickup truck and says, fighting back tears, “Take care of her.”

We are laughing more at him—his condescending paternalism, the mawkish sentimentality that mirrors,  in much cornier terms, ISIS itself. (“ISIS: We’ll Take it From Here, Dad,” goes the final slogan.) We are laughing, as well, at the apparent incongruity between suburban Dads and the ISIS ones we see on TV. The black flags, the beards, the uniforms, the almost science-fictional villainy, all invites morbid fascination as well as sarcastic mockery from those far away from its violence and the US-sponsored wars that have nurtured it. The cartoonishly sinister acronymic name they have been given in the English-language media is so cartoonish that it was, weirdly and purely coincidentally, the same as the shadowy super-spy agency in Archer, an actual TV cartoon.

In the best tradition of anti-authoritarian political humor, the best ISIS jokes play on the perceived discrepancy between the seriousness of the subject (ISIS) and its mediocre counterpart (suburban Dad). 19th-century German funnyman Arthur Shopenhauer theorized in “On the Theory of the Ludicrous” that what makes us laugh is just such an  experience of “incongruity.” For him, the key incongruity is that between abstract conceptions and hard reason–what we imagine to be true and what we come in the course of the joke to recognize. This new realization often fails to flatter our earlier fantasies. Seeing our reason unmasked as the “troublesome governess” we always suspected it to be, Shopenhauer writes, is a source of pleasure. Scornful laughter, he continues, is “the active expression of the discovery now made of the incongruity between the thoughts which in our foolish confidence in man or fate, we entertained, and the truth which is now unveiled.”

Which brings us to our finest and most radical source of political satire, Clickhole, and its own version of ISIS humor. Many of its ISIS jokes are also meta-jokes about the immorality of ISIS jokes, which probe our many “foolish confidences”–the ones we Americans indulge in our “civility,” our “values,” and in our “security,” all the things that supposedly separate “us” from the barbarians in ISIS. After the attacks in Paris, this sharp incongruity came back with force. ISIS declared war in Paris on what a New York Times writer called “the human spirit,” instead of the Kurds, Syrians, and Iraqis it had been declaring war on. In Clickhole’s first ISIS joke after the Paris massacre, this maudlin self-congratulation was the target. “Heartwarming: American and ISIS Forces Came Together To Celebrate Christmas,” read the headline, a joke on 1) that clash of religious civilizations myth that sustains so much elite commentary on the Middle East and 2) the “heartwarming”: legends you might have heard about Germans and Frenchmen in Flanders.

If incongruity is the wellspring of comedy, here it lies in the distinction between the face-to-face slaughter of 1914 trench warfare between two neighboring European states—ah, they were simpler times!—and our present-day long-distance drone imperialism.

Hey gang! We here at #ISIS just heard about this Anthony Bourdain guy & if there’s 1 thing #ISIS has “No Reservations” about its #ShariaLaw

But Clickhole’s unique brand of absurdity more often leaves open the question of who or what is being made fun of, and why. Its hilarious parody of a CIA parody of an ISIS Twitter account was a joke in part about ISIS’s well-known use of social media. In the series, the CIA developed a Twitter account to discredit the ISIS brand by pretending, in ISIS’ name, to love, with the most uncompromising piety, Anthony Bourdain and Alfredo sauce. So it was also a mockery of the CIA’s incompetence (it calls its parody ISIS account @ISIS_fake), Anthony Bourdain’s tiresome ubiquity on TV, and…something about Alfredo sauce.

The #ISIS brand is powered by pure 100% Alfredo sauce

Or the video entitled “Latest Attack: ISIS Just Replaced The ‘Friends’ Laugh Track With Someone Making Negative Comments About Ross.” The video–which has brought me to delighted, bewildered tears at least twice–plays on an incongruity, but it is unusual in the genre of ISIS humor in that the terrorist group is not the subject of the joke–Clickhole is not using Friends to mock ISIS’ clownishness, but the other way around. The discomfort here comes not from any light treatment of ISIS, but from watching Friends without a laugh track: watch it if you dare because Friends without anyone laughing will make you feel something like real despair. 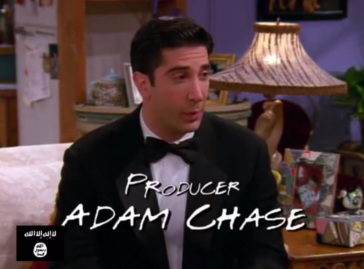 “I give Ross a C-!” bellows the unaccented, American, 20-something, clearly-not-a-member-of-ISIS voiceover, after Chandler has once again asked Joey to get out of his favorite chair. What are we laughing at, exactly? ISIS’ self-righteousness? The incongruity between the milquetoast banality of Friends and the apocalyptic violence of ISIS? Or the absurdity of calling upon ISIS to reiterate, ever so tentatively, the awfulness of Friends, as settled a case as there was?

A friend of mine once shared one of its videos on Facebook with evident relief and the comment, “Clickhole is such a comfort.” This came, I think, from the fact that it is principally a spoof of the earnest pragmatism of Upworthy.com, the site dedicated to the strange belief that if more of your Facebook friends liked posts about, say, cancer or ISIS, those things would go away. Besides Upworthy, Clickhole’s targets are the kind of self-satisfied, urbane liberals that other popular political satirists, like Jon Stewart and John Oliver, are generally content to flatter. Take, for example, “5 Ways ISIS Can Reduce Its Carbon Footprint.” 2 suggestions: “eat locally” and “take public transportation,” a reference to the Toyota pickups for which ISIS is so well known. In other words, Clickhole will not let our “foolish confidences” go unridiculed. Its absurdity–why the hell is the CIA talking about Alfredo sauce?–is often vaguely unnerving, one of the reasons, I think, Clickhole can provoke such hysterical, tear-inducing laughter. The closer we get to the tragedy of our times, the more farcical it becomes.

ISIS provides our country’s own bigots with the all-purpose bogeyman they never need help finding. See Marco Rubio, lamenting how Obama “pits us against each other” by visiting a mosque and shaking some hands. Or Milwaukee’s fascist Sherriff David Clarke (himself African American), who accused Black Lives Matter of being a fifth column for ISIS. Together, they made for a single, ur-bogeyman. Black Lives Matter? More like “Black Lies Matter,” tweeted Clarke. (Puns, as Dryden wrote: “the lowest and most groveling kind of Wit.”)

Before long, Black Lies Matter will join forces with ISIS to being down our legal constituted republic. You heard it first here.

Despite its very real existence, and the appearance of its violence outside of Syria and Iraq, ISIS is not unlike Saddam’s imaginary WMDs, or mythical New Jersey “Arab populations” cheering 9/11–the symbols of “evil,” the harbingers of doom, the antitheses of “our” “values.” But the second time has been a farce, as the Cruz/Rubio/Trump/et. al xenophobia shows. ISIS jokes reveal this best: mockery of ISIS reflects a learned distrust of war-mongering politicians warning of apocalyptic bogeymen in the “Middle East.”

This makes the ISIS joke a comic legacy of the Iraq War. When we laugh at ISIS, at one level, we are affirming that they are still clowns. But here in the U.S., we are insulated from the violence. We are laughing less at ISIS and more at all our foolish confidences–in “Western” moral superiority, in the innocence of our drone bombers, and at the incongruity between what we were once told about the invasion of Iraq, and the bitter truth whose full brutality is only still unfolding. The ISIS that presidential aspirants and bigoted governors welcome so eagerly into their speeches is exactly what we were told we were fighting against in Iraq and Afghanistan in 2001 and 2004–inscrutable “terrorists” who hate Our Way of Life. And yet ISIS is exactly what those wars produced–probably the most enduring thing that they did produce.

This is the shame that shadows the best ISIS jokes and also some of the nastiest, like the reddit one-liner. The biggest joke, which is the “Bush doctrine” and its long, tragic unraveling, may be on us, but its brutal consequences aren’t.

The punchline, by the way, is “the execution.”