In 1968, Cleveland finally had some good news: thousands were out of work, but at least the deindustrialization of its riverfront was making the Cuyahoga River less polluted. By 1969, of course, the river was on fire. So much for good news. 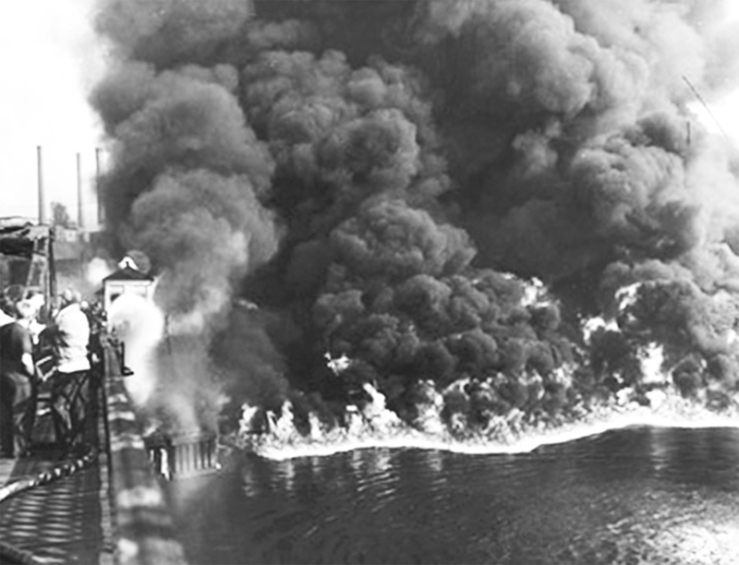 But Peter Thiel, who like his patron Donald Trump styles himself as alternately a Jeremiah of national doom and our prophet of deliverance, remembers it differently.

[T]his isn’t the dream we looked forward to. Back when my parents came to America looking for that dream, they found it right here in Cleveland. They brought me here as a one-year-old and this is where I became an American. Opportunity was everywhere. My dad studied engineering at Case Western Reserve University, just down the road from where we are now. Because in 1968, the world’s high tech capital wasn’t just one city: all of America was high tech.

It’s hard to remember this, but our government was once high tech, too. When I moved to Cleveland, defense research was laying the foundations for the internet. The Apollo program was just about to put a man on the moon–and it was Neil Armstrong, from right here in Ohio. The future felt limitless.

Now, no offense to Cleveland, and maybe Neil Armstrong was “from…Ohio,” but amidst all the nonsense in Thiel’s speech, this paean to late-60s Cleveland as the paragon of 20th-century progress was the silliest part. Despite Thiel’s loathing for what he calls identity politics and “culture wars”–which he immediately followed in this speech by mocking transgender people–he is playing desperately to the most rigid and unforgiving form of identity politics we have, white nationalism.

The old-fashioned Jetsons fantasies of mid-century American futures that Thiel loves so much–moon landings, flying cars, you know, everything you think of when someone says, “Cleveland”–are the twin to Trump and Thiel’s thunderings about “national decline.” “Stagnation” and “decline” are popular themes of Thiel’s–he talks about it constantly, sometimes denouncing Silicon Valley itself for not thinking “big” enough (“we wanted flying cars, we got 140 characters” is one of his signature witticisms). His reference point is always the mid-century America of Marty McFly, when a strong state dreamed big technological dreams.

And like most  forms of cultural nostalgia indulged by American white people, the subtext, and sometimes just the text of this talk of “national decline” is a racist identity politics. It’s a fantasy of a Cold War golden age when the only non-white people they can see are on stage doing “Earth Angel.” So when Thiel pontificates about “national decline,” by which he means the fall of U.S. empires abroad and a fragile white masculinity at home, bring on “national decline.”

1 thought on “Innovation in Action 3: Back To The Future…in Cleveland”