The question that emerges from all these Detroit rising stories, is the city is coming back for whom? Not the people I spend my time there with. Not most of the city. https://t.co/gtRGOkV2p4

This may be the all-time worst @nytimes feature on Detroit — and that's saying something. It's feel-good clickbait based on 1/139th of the city, and it doesn't even portray that fraction accurately https://t.co/p50K8XApbx

The feature in question, “Detroit Was Crumbling. Here’s How It’s Reviving,” appeared in the print edition and website of the New York Times as a photo essay by Emily Najera with brief, ponderous observations by Monica Davey, the paper’s midwest bureau chief.

Davey often often finds herself in a poetic mood when she visits Detroit. She is the author of one of the most ludicrous pieces on post-2008 Detroit to ever see print: the notorious 2010 cold-weather-bites-man story, “Cold Leaves Detroit Unfazed.” Reflecting on one Detroiter’s stoic indifference to the winter wind, Davey’s piece concluded, like some bootleg Carl Sandburg on a deadline:

Most were preoccupied not by the temperature, but by the hints its stiff wind seemed to whisper about the long haul that stretches, inevitably, ahead. “This is kind of like a prelude,” Mr. Stevens said quietly. [Ed. note: the wind is a symbol, for the economy]

The building, like the symbol, must wait. And here is the first problem: if buildings are  symbols, in a story about real estate they are not very reliable ones. That is, they are also property, wealth, and power, and none of that is typically visible on the doorstep of an abandoned house. Sometimes, as when their slum landlord installs windows to distract from his neglect of the structure and its neighborhood, the symbolism is quite calculated–but there’s not a lot you can learn about Michigan Central Station’s abandonment just by looking at it. You wouldn’t know, for example, that the station is owned by a Grosse Pointe trucking magnate, Matty Moroun, who owns the city’s only bridge to Canada. Nor would you know that controlling the station and its rails allows Moroun to ward off a planned expansion of the rail tunnels that link the U.S. and Canada–tunnels that compete with Moroun’s current monopoly on truck traffic over the border. So much for symbolism. (See pp. 184-188 in the link.)

Most of Davey’s piece focuses on Brush Park, a neighborhood of Gilded Age mansions north of downtown. Much of the district had long fallen into dereliction by the turn of the last century, which lent a macabre appeal to the ornate gabled houses that remained. Davey interviews one new resident:

“Revival,” though, is mostly a story of “economic indicators”–bloodless numbers on spreadsheets. It’s more a story about symbols and buildings, in other words–and less a story about the people who inhabit and own them. Najera’s accompanying pictures of Brush Park seemed to answer the “ruin porn” photos of a decade ago–pictures which, in the national media, illustrated headlines of financial ruin with visible “symbols” of decline. Najera’s Brush Park pictures, by contrast, show rehabilitation. What they don’t show, oddly, is any more people than ruin pictures typically did. One of her pictures is clearly a calculated response to one of Andrew Moore’s pictures from his widely discussed (and widely panned, at least by me) 2010 book, Detroit Disassembled. On the left is Moore’s photo of a Brush Park townhouse; on the right, Najera’s 2018 response. 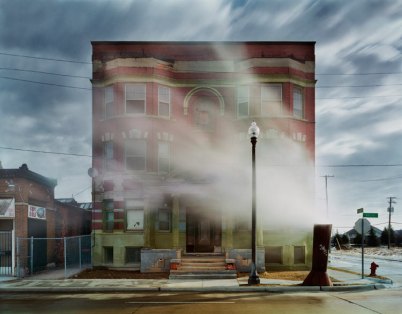 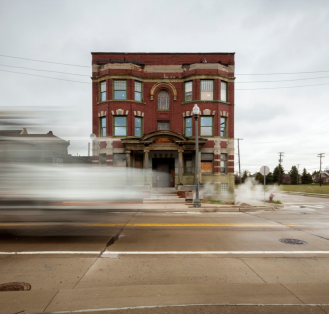 See what she did there? The blur of a passing automobile–one of the only hints of human presence in Najera’s photos–fills in for the steam of urban decline. The glistening windows fill in the darkened cavities of abandonment. But for pictures ostensibly depicting revitalization, there isn’t much in the way of vitality here.

Davey’s accompanying text included some expected to-be-sure paragraphs on parts of the city left behind, but the story is framed as an uplifting story of a fragile revitalization. What it shows, though, is that revitalization narratives are not the reverse of ruin porn’s aestheticization of poverty, they are its twin. Neither kind of story has much room for people–at least most people, anyway.