In the archives of the National Association of Manufacturers, I found an interesting memo from the organization’s public relations department. The NAM got its start in the depression of the 1890s, as a confederation of industrialists fighting labor militancy, and in the 1930s became a leading enemy of the New Deal. During World War II, the NAM looked forward to the end of war production and the resumption of the battle against labor and public ownership.

A big part of that battle was in the mass media: the group devoted a lot of resources programming on radio, television, and in print journalism. Here is a document the group’s communications pros prepared on semantics in late 1944. The paper, which had to do with a campaign for privatization of electrical utilities, is revealing as a snapshot of the ideological tenor of the New Deal era (which the NAM people were surely paranoiacally overstating, of course).

It’s hard not to think that the NAM has, for now, succeeded in reversing these terms, making “public” the bad word. And even if their substitutes for “private ownership” and “public ownership” are quite clunky, “management” has proven quite successful. 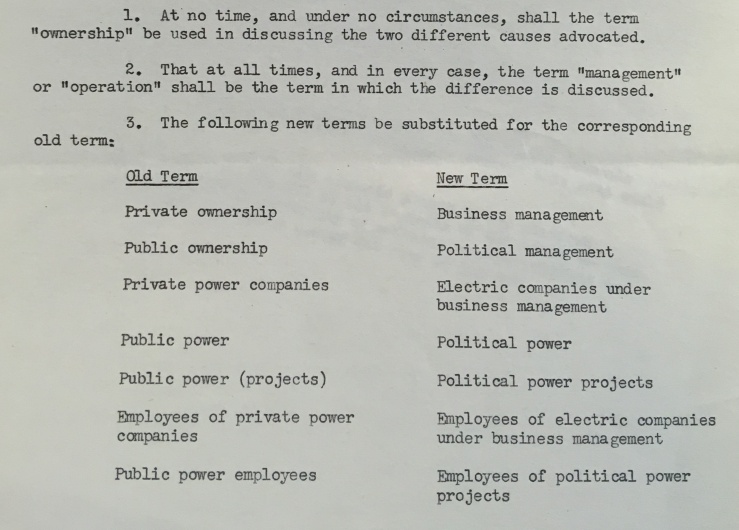 Raymond Williams notes in Keywords how “management” came in the postwar world to describe a “body of paid agents to administer increasingly large business concerns.” Management gradually replaced “the bureaucracy” (which referred to bad, private concerns) and “the administration” (which referred to public ones). “Management” united private and public, or rather, replaced the latter with the former. There is no “public”; there are only managers and customers.